The Buffardella  – From the Origins to becoming the symbol of Petrognola

San Giovanni to keep him from choking people at night. Sometimes he may be seen sitting on a pile of hay or on a tree.

It is generally believed that the Buffardello is invisible, but there are testimonies of those who saw him in person: according to them the strange being lives in stables or trees, sometimes he is seen entering through a window, some other times walking, hopping and kicking. In the villages, near the houses his typical sarcastic laughter is often heard. In Gallicano it is said that he had once occupied a house and spent time opening and closing the windows laughing like crazy.

In the hamlet of Petrognola instead, they tell of a Buffardella who loves to make jokes and dressing up changing clothes and hair color. We imagined her living in an old house lost in the woods of Garfagnana, where no one can find her … and that’s where she enjoys brewing beer according to ancient and original recipes with Farro.

Some say that her sisters help her at work; there are those who believe instead that these apparitions are due to disguises or play of shadows.

Everything seemed to be just a product of imagination when one fine day a brewer named Roberto Giannarelli, a lover of Garfagnana, began producing a series of craft Farro beers …. I wonder if the Buffardella has something to do with it! 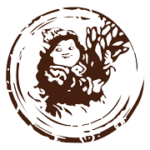